Don’t you just love them?

I’d like to introduce you to some of my favorite teachers here.

Teachers in studios, classrooms and in the world at large. These are the folks you will see featured in my new series of interviews here at Teacher Goes Back to School.

I hope you enjoy these teachers as much as I do!

Have you met Anna yet? She’s March’s Featured Teacher and yogi revolutionary.

In case you missed it, here’s PART 1. 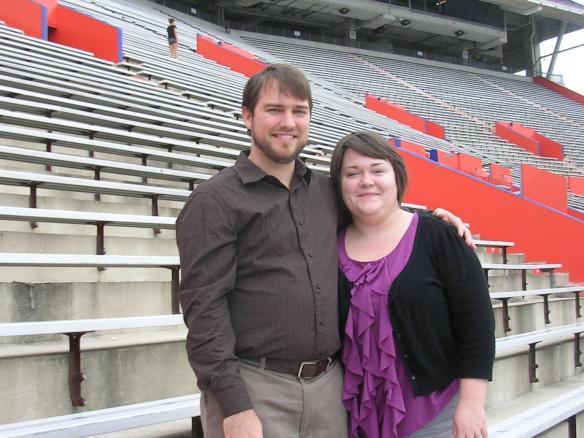 Do you have a home practice? What is it like? How often? Where? How’d you start and how do you keep at it?

Since my yoga practice started off as a home practice, I’ve always valued practicing at home.  It, like everything else, is a work in progress and ebbs and flows!  I’d say I probably practice at home at least a couple times per week.  I keep my mat rolled out as inspiration.  When I practice at home, I do a lot of different things; sometimes I use a DVD or online sequence, but probably even more often I just start and see what happens.  That’s what I love most about practicing at home; it’s really where I learned to figure out what my body wants.

What’s your favorite pose? Why?

Tough question!  My favorite yoga treat is Supta Baddha Konasana–all propped up, of course.  I just feel so spoiled when I’m in that pose!  I also love some good hip openers, like Pigeon.

Eek–that’s also hard to choose!  Gomukhasana is one of my nemesis poses because my shoulders are perpetually tight.  They’re actually better than they used to be, but that’s not saying too much.

Why is your business called Curvy Yoga? What does it mean?

I chose the name Curvy Yoga because I wanted to honor both the curves of our bodies and our lives.  To me, life is a curvy road, so I used that in the name of my business to reflect the fact that it’s about more than just yoga modifications for curvy folks.  It’s also about fat acceptance, body positivity and meeting yourself where you are.

Language is very important to me; I chose the word curvy because I hoped it would be welcoming.  I’ve been very intentional about using the words curvy and fat in my writing and speaking as a way of claiming space for bigger bodies in a positive way in the yoga community.  While I know that both the words curvy and fat have their detractors, this is what makes the most sense to me as a way of supporting and advocating for the goals of Curvy Yoga in a broader way.  I believe that by reclaiming fat as an adjective and not a moral judgment, we can continue working for celebration of the diversity of bodies practicing yoga.

Do you have a meditation practice?

Yes; I’m working on making my meditation practice more consistent, but in the spirit of it being a practice, I’ll go ahead and say yes.  I found meditation the same time I found yoga, and I’ve been working with it ever since.  I’d say that my yoga practice has been a more constant companion in my life, but I very much want to continue with meditation.

What prompted you to write your now famous letter to Yoga Journal?

I love reading Yoga Journal. I’ve always been a reader, and I just totally geek out when it comes in the mail.  I set aside a special time and cuddle up with it.

When I opened that particular issue of the magazine and came to that article, I about fell out when it opened with a reference to Linda Bacon (a fat acceptance and anti-dieting heroine) and Health at Every Size.  I can’t even tell you how excited I was!  I was just like “yes–finally!  I’ve so been waiting for this!!”  So then when I read the article and it was promoting what I read as a conflicting message, I was really disappointed.

I just sat with it for awhile because I didn’t know what to do with it, but I just kept thinking about it.  I kept feeling like I should write about it, but I thought of a million reasons why it wasn’t a good idea.  Finally, though, I just knew I had to do it because it was a great example of what I talk about quite a bit on my blog–how insidious weight loss messages are and how easy they are to overlook, especially when they’re couched as “health” or hiding in magazines that we don’t always think of when we think of magazines contributing to negative body image.  I think if we don’t call out things like this, it becomes harder and harder to create welcoming space for people to try yoga who wouldn’t normally think it’s for them.

I started my blog a year ago because I kept looking for what I wanted to read and not finding it.  Over time and as interest grew, it’s evolved into what it is now.  My intention for the blog is for it to be a place where people can explore yoga and their relationships to their bodies and selves in an open way.  As you pointed out in one of your posts (which I loved!), yoga isn’t all f*cking sunshine and rainbows.  I find that the same is very much true of the journey to accepting and loving the body you have today.

What other blogs do your read? Why?

Oh, my.  I recently discovered Google Reader, which has been both a blessing and a curse.  I have about 150 blogs in my reader and do my best to keep up with them (thankfully they don’t all post all the time, so it’s usually not too overwhelming).  Because I have so many fabulous blogging friends, I won’t list names so I won’t leave anyone out (except for Teacher Goes Back to School, obviously! Ed: awww, shucks!).  I will say that the majority of what I read is a mix of yoga, fat acceptance and body image blogs.

Who and what inspires you?

Wow–so much!  I feel like I’ve missed quite a bit in my life by always being really focused on doing and achieving more and more and more.  As I’m gradually letting that go and narrowing in on what’s most important to me, I’m inspired by lots of things–big and small.  I’m endlessly inspired by my yoga students; they’re such incredibly warm, thoughtful and talented badasses.  I often can’t believe my luck that they choose to be in my classes!  I’m also hugely inspired by the yoga community I’ve found online.  I’ve made some dear friends and wonderful connections there; these people are doing so much toward a more inclusive yoga community, and I so appreciate their passion and dedication.

I’m also really fortunate to be surrounded by my brilliant, loving, and hilarious husband, sister, best friend and parents.

If you’d like to learn more about Anna check out her blog.

Please leave any questions or comment love below – we’d love to hear from you.

8 thoughts on “Grabbing Life By the Curves: An Interview with Curvy Yoga’s Anna Guest-Jelley, Part 2”